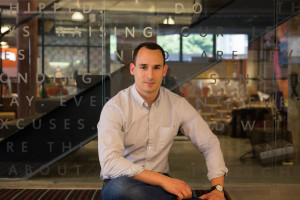 Last week, nationally-recognized and proven accelerator model Techstars announced it would begin a three-year program in the growing entrepreneurial district of Detroit.  Officially dubbed Techstars Mobility, driven by Detroit, the program will kick off June 9, 2015 with 10 next-genertation automotive, transportation, and mobility startups and conclude with a Demo Day on September 10, where each team will present to investors, industry leaders, and the community at large.

Ted Serbinski, formerly with Detroit Venture Partners and current MVCA board member, has been named as the Managing Director of Techstars Mobility, driven by Detroit. Serbinski, formerly of Detroit Venture Partners, is responsible for building out the new program, recruiting 10 companies to join the program and bringing together talented mentors from corporate partners including Ford, Magna and Verizon, and others throughout the region to help propel companies during the summer.

Serbinski tells MVCA, in his own words, why he’s excited about bringing Techstars to Detroit and what he hopes his new team will accomplish:

I remember 2 years ago walking downtown Detroit with my (Detroit Venture Partners) colleague Jake Cohen. We were talking about the future of Detroit and its startup ecosystem.

As we talked, we both honed in on the same observation: we needed Techstars to come to Detroit. There were a number of great accelerators in and around Detroit. We didn’t need just another accelerator but one that could take advantage of the massive resource we had in our backyard: the automotive industry. The thought was, that if done right, startups from all around the world would want to be in Detroit for this uniquely positioned accelerator. Not only that, but if Techstars did decide to come to Detroit, it would confirm our thesis that Detroit’s startup ecosystem has a bright future.

Techstars was the ideal choice. It is the gold standard in startup accelerators. They have a massive network of 3,000 successful entrepreneurs, mentors, investors and corporate sponsors geared towards helping startups do more faster. Since 2006, Techstars has launched 15 programs worldwide that have trained nearly 500 companies that have seen $2 billion in market capitalization. Quite an impressive feat and Techstars is open about their results.

Techstars has historically entered emerging startup markets. Boulder in 2007, Seattle in 2010, NYC in 2011, Austin 2013. The community they build around their program accelerates startup growth in the region. The results being, that each of these communities has risen into the top 10 startup regions in the US. Brad Feldwrites about this community-driven approach in more detail in his book Startup Communities.

I’m proud to say that Techstars is now coming to downtown Detroit.

On December 11th, in front of a crowd of a couple hundred journalists at Ford’s headquarters in Detroit, Bill Ford unveiled Techstars Mobility, driven by Detroit.

Ford Motor Co., along with Magna International and Verizon Telematics, are the 3 founding corporate partners for Techstars Mobility.

As part of this new program, I will be joining Techstars as the Managing Director of their Detroit Mobility program. I’m excited about this new role and further putting the spotlight on startups in Detroit. This also addresses the first missing ingredient to building a thriving startup ecosystem in Detroit.

I’ve enjoyed helping build up Detroit Venture Partners and put Detroit startups on the map. I will continue to work with the team and portfolio companies, as we all work together in building up Detroit’s startup ecosystem.

The Future of the Detroit Startup Ecosystem

Detroit is the automotive hub of the world. Michigan has more engineers per capita than anywhere else.

Yet today, Detroit’s startup culture is lacking the national recognition it deserves. This is in stark contrast to nearly 100 years ago when Detroit was the epicenter of innovation.

Combining the emergence of Detroit’s startup ecosystem with its heritage of automotive, Techstars Mobility is going to drive the next-generation of mobility focused companies right here in downtown Detroit.  And I’m proud to be a part of the next step in the mission to make Detroit a top 10 startup hub in the country. To define Detroit as the startup mobility and next-generation transportation hub of the world.