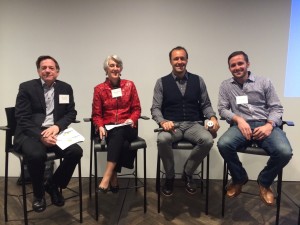 Mark Gurney, Jody Vanderwel, Rick DeVos, and Ryan Vaughn are ready for the panel to begin! 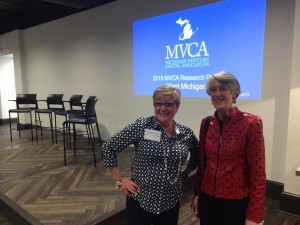 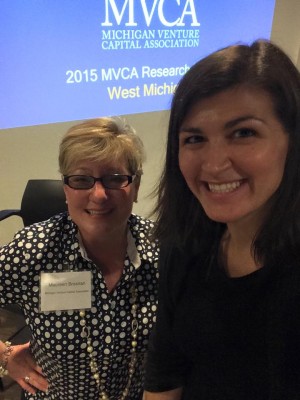 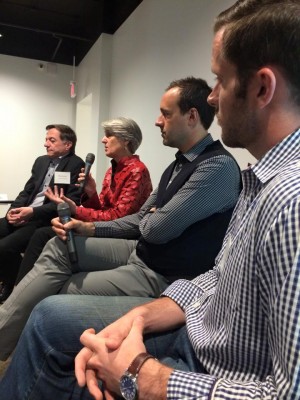 Maureen Miller Brosnan, executive director of MVCA, told the audience that this year’s in-depth analysis of venture capital activity in the state indicates a steady and consistent trend of success in Michigan. “The number of investors, the amount invested in Michigan-based companies, and the number of successful, active angel- and venture-backed companies located and hiring in Michigan are all trending upward, showing significant increases in the last five years,” she said. The 2015 Report also reflects members’ request that the organization examine venture activity in specific geographic regions of the state. “In West Michigan, it’s the active angel investors, two large universities (Grand Valley State University and Western Michigan University) and an entrepreneurial community with strong dedication to the region that set it apart from other VC pockets in the state,” she reflected. There are six venture firms with headquarters or offices in West Michigan, with the highest concentration of activity in Grand Rapids and Kalamazoo.

Emily Heintz, Associate Director of MVCA, heads the organization’s research efforts, which this year included polling 46 venture firm and angel group members. “MVCA venture firm members told us they expect the startups they’ve already identified as viable successes are going to need $1.3 billion in additional investment in the next few years. These firms have earmarked $108 million of additional support for these growing companies, but our venture investors are going to need to raise substantial funds in coming years to keep these young Michigan startups healthy and growing.”

Rick DeVos, founder and CEO of Start Garden, called Michigan “a special place and capable of incredible, interesting things, but to grow, we need to do a better job of telling Michigan’s startup stories: successes, failures and opportunities. It’s an exciting time to be here.”

A panel discussion featured DeVos plus several other members of West Michigan’s entrepreneurial and early-stage investment community. Panelist Ryan Vaughn, founder of the venture-backed company Varsity News Network, says, “The support structures in West Michigan are strong and my company is a better organization because we’re here.” Panelist Jody Vanderwel of Grand Angels, remembers when her organization began in 2004, and it was the first time that angels in the area had collaborated to provide a “front door” for entrepreneurs to have access to capital.  “Grand Angels was the first early-stage investing group in West Michigan and a catalyst for the beginning of an entrepreneurial community,” she recalls.  “Today it is part of a thriving ecosystem not only in west Michigan but also around the state.”

About the Report’s Findings—West Michigan Specific