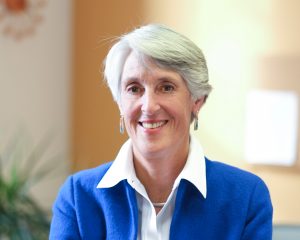 Since 2005 Jody has been actively involved with Grand Angels, which invests in early-stage businesses.  From 2005 – 2016 she served as president of the organization. In this capacity, Jody oversaw Grand Angels’ deal sourcing, investing, and portfolio management, and represented the group at networking and educational events across West Michigan.  Since her retirement as president at the end of 2016, she has continued as a member of the investment committee of Grand Angels Venture Fund II, LLC, and of the board of Grand Angels.  During her tenure, Grand Angels invested about $23,000,000 in 39 companies through 105 rounds of financing.

Prior to Grand Angels, Jody worked several years in private legal practice before joining Herman Miller as corporate counsel and then vice president for corporate giving.

Jody is currently a member of the Michigan Venture Capital Association Board, the Michigan Accelerator Fund I Advisory Board, the Baker Publishing Group Board, the Fuller Theological Seminary Board, and was appointed by Governor Snyder to the Michigan Strategic Fund Board.   Jody’s past board service includes Priority Health, a board she chaired from 2011 – 2015, Grand Rapids Symphony, Holland Symphony, and Young Life National Board.